Nowadays, the need for machines that can rapidly assess and solve real-world problems is increasing drastically, and researchers are turning towards Artificial Intelligence (AI) and its branches, like machine learning, natural language processing, deep learning, etc. to generate accurate assessments and results quickly. To reach this demand, AI leverages the capabilities of AI agents and Search Algorithm like Informed & Uninformed Search Algorithms, Hill-Climbing Algorithms, Alpha and Beta Pruning Algorithms, etc. to perform evaluation function by finding the fastest and most suitable path to achieving the goal state.

Earlier, we discussed a few of these algorithms and the role they play in making AI agents capable of searching for the quickest and the most accurate solutions. However, today, our focus will be on understanding ‘What is Alpha Beta Pruning in AI?’

Also known as Alpha Beta pruning algorithm, Alpha Beta Pruning is a search algorithm that is used to decrease the number of nodes or branches that are evaluated by the Minimax Algorithm in the search tree. It is termed as the modified version as well as the optimization technique for the minimax search algorithm and is used commonly in machines playing two players games like Go, Tic Tac Toe, Chess, etc.

Alpha-Beta Pruning is known so because, it passes two additional parameters in the minimax function, namely Alpha and Beta, that represents the best value that the maximizer guarantees as well as the best value that the minimizer guarantees at that level. Also, the Alpha here is negative infinity and beta positive infinity, and players start the search with their worst possible score.

This algorithm is extremely beneficial, as it reduces the computation time and makes the search go deeper in the game tree, quickly. Moreover, Alpha Beta cutoff or prunes the evaluation in the game tree, when even a single possibility is found that proves the current move is worse than the previously examined move.

Let us consider one of the two-player games we mentioned earlier for this example, Tic Tac Toe, wherein each opponent has to pick a symbol (X or O) to represent them on a 3 by 3 board. The objective here is to reach the final game state, which is greater than or equal to (≥) the child node evaluated before it. The evaluation function is initiated by generating the entire game tree and performing the evaluation function until the Alpha Beta Pruning condition is achieved.

The idea, in short, is to search for all possible moves, by simultaneously pruning the areas that do not require further searching.

How do you implement Alpha Beta Pruning in Minimax?

Before we discuss the implementation of Alpha-Beta Pruning in the Minimax algorithm, let us get an insight into the concepts of the latter.

Minimax, which is also known as MinMax, MM, or saddle point, is a backtracking algorithm, used in decision making, statistics, as well as game theory to find the most optimal move for a player and to minimize the possible loss for a worst-case scenario. Unlike Alpha-Beta Pruning, this algorithm tries to see every possible outcome and then tries to optimize the final option it has in hand. Hence, it is termed as a two-pass search, wherein one pass is used to assign heuristic values to the nodes, while the other is responsible for propagating them up the tree.

This tree consists of various layers of min and max values, which represent the two parameters Alpha value (- ∞) and the beta value (+∞). 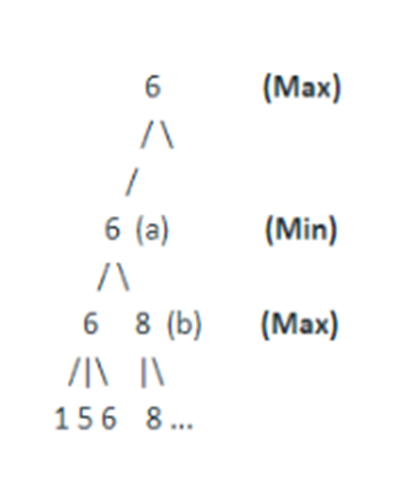 Each node respectively represents the minimum score that the maximizing player is assured of and the maximum score that the minimizing player is assured. Therefore, the search here is initiated from the player max and is continued to other branching factors. It was only after reaching the leaf node with a similar value of 8 that the search was terminated, as the algorithm does not consider searching further necessary.

This search would have been continued to its last node, had we implemented just the minimax algorithm, which as stated earlier tries to assess all possible outcomes and then optimizes them to reach the final goal.

Performed with an aim to reach the goal state effectively and swiftly, Alpha-Beta Pruning involves an intuitive process, which is initiated by setting variables alpha and beta to the worst-case values. This process further involves four important steps which are:

Another important aspect that we need to consider while comprehending the workings of the alpha-beta algorithm is its move order, as its effectiveness is highly dependent on the order in which each node is examined. These are of two types:

if MaximizingPlayer:
maxValue = -INFINITY
for each child node:

Advantages And Disadvantages of Alpha-Beta Pruning:

Using Alpha-Beta pruning is always beneficial, as it offers various benefits like better time complexity, over the minimax algorithm. However, there are still some drawbacks associated with this algorithm, which prevents it from being the ideal or the go-to search algorithm for all. Hence, listed below are the various advantages and disadvantages of the Alpha-Beta Pruning algorithm.

From the above discussion, we can conclude the search algorithms like Alpha Beta Pruning are creating a revolution in the field of Artificial Intelligence and helping it pay a new and more efficient way of creating advanced approaches to solving such problems. Moreover, the alpha-beta pruning algorithm is a quality optimization over the min-max algorithm, and together with the minimax algorithm is becoming the foundation of the searching techniques.